In 1875, an English electrophysiologist Richard Caton reported that changes in body movement could influence the flow of electrical currents monitored by channels placed on the surface of the head of an animal (and also this is when they noticed electrical stimulation could affect bodily movement) [1]. Half a century later, in 1929, a German psychiatrist called Hans Berger placed electrodes on the human scalp, and successfully recorded a relatively slow and rhythmic brain waves [2]. This was considered the first discovery of human EEG. However, neurophysiologists at that time initially believed that such slow waves Berger observed was merely a noise or some sort. During 1930s, similar observations were reported by renowned physiologists, which led to the acceptance of the EEG as a “real” phenomenon.

The first EEG was a very coarse measure of brain activities, and it was long before computers became available for EEG analyses. So electrical signals needed to be translated into ink onto paper by hand. Furthermore, people whose brain activity was monitored had to lie down quietly, otherwise it would interfere with the data reading. Now that technology has advanced, collecting and analysing EEG is much easier in terms of cost and portability – they are relatively cheap compared to other brain imaging techniques such as fMRI, and the improvement in techniques and algorithms allows us to measure brain activities of a moving person like a marathon runner [3].

2. It monitors electricity in a brain, but it’s completely safe.

As previously mentioned, EEG monitors electricity in a brain. Your brain has a hundred of billions of brain nerve cells called neurons. They produce electrical signals to communicate information with each other, and EEG can detect activity of large groups of neurons in small areas of the brain, which are active at the same time. This then could be recorded in a wave pattern on a computer screen (or on a graph paper a long time ago). The waves would look like this:

Detecting electricity in your head may sound scary but it really is not. EEG is a completely safe, non-invasive way of monitoring brain activities as EEG channels do not give out electricity (contrary to technique like transcranial magnetic stimulation, where [ [bit to rephrase] some current is sent]). The technique is so safe that it has long been used in hospitals for about 80 years, with the first clinical EEG laboratories being founded in the US in the 1930s and 40s. It has been particularly useful for patients with seizures and epilepsy because it is known that patients with epilepsy typically demonstrate characteristic EEG patterns during an epileptic seizure [4]. It has also been used to evaluate the depth of anaesthesia, and to confirm brain death [4,5].

3. We read waves to understand your brain. 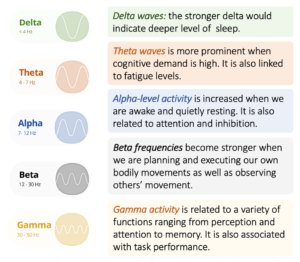 The data collected by EEG looks like a wave, as I mentioned earlier. The waves comprise multiple dimensions, but for now let’s look at the frequencies, which is basically how fast the wave changes/varies. The unit is Hz, and higher Hz means faster waves (e.g. 10 Hz means 10 cycles of wave happens per second). We typically use a range of Hz to link a certain pattern of brain waves to a certain cognitive activity. For instance, Alpha waves (7-12Hz) are known to be prominent when you close your eyes and feel relaxed, but not asleep. Theta (4–7Hz) waves have been linked to several cognitive functions including memory [6].

However, it is important to emphasise that EEG does NOT measure your thoughts or feelings. So it cannot be used to read your mind. It only tells us whether there is something going on in your brain (which is why we can use this to confirm brain death), and whether the waves look different depending on what you are doing while your brain activity is being monitored.

So, that is the very basics about EEG. It sounds good and straightforward – Put the cap on and get the waves, and interpret the waves. But It won’t go that easy when you want to do this with young babies. 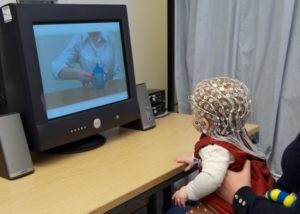 The principle is the same, but there needs to be some modifications to use this cap with small humans. For instance, the cap size obviously needs to be much smaller than adults’. But the biggest difference is how we could get good data.

Getting good data from these little ones is VERY challenging. Babies can be fussy, hungry and sleepy so they can’t sit still, which distort the data. Even though I said earlier that we could measure a runner’s brain, wriggly babies are much more difficult.

If you look at the figures below, you’ll see what can happen in the data when the baby couldn’t stay still and quiet. It gets “noise” from the body movement, and as the noise overwrites the “real” brain activity we want to see, sadly, we can’t use it as our final data.

Also, not many babies are happy to wear the cap. The cap needs to be wet (either with water or gel) to sensitively pick up changes in electrical activities happening inside the brain, so it can be pretty annoying even for adults to wear. It’s no surprise that babies wouldn’t want to keep wearing it for long, or they want to pull it off in the middle of their session.

So, it is not an easy job to collect good brain data from babies. But then, why should we be bothered about baby brains after all? In my next blog, we’ll look at why 🙂

Web articles;
– About Neuroplasticity
“What is brain plasticity and why is it so important?”
– General articles from baby brain scientists
“What Is Going on in Babies’ Brains When They Learn to Do Something?”