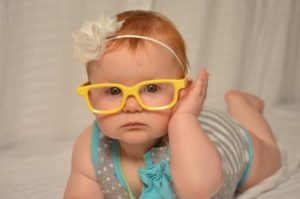 At first, newborns can focus at a very limited distance, they are attracted to stimuli in the periphery and have distinct visual preferences. Among these preferences, we can cite moving stimuli, high-contrast objects and face-like patterns. After months of visual experience and of rapid maturation of their visual system, by six months of age their visual acuity reaches adult standards. Visual acuity can be defined as the measure of the finest detail our visual system can resolve/recognize. But how can we measure that in a tiny non-verbal creature?

Unlike adults, infants cannot tell us which letter they see on a standardised chart (aka Snellen Chart) from a certain distance. What it is tricky working with babies is that they cannot follow our verbal instructions, they cannot deliver verbal responses and they have a limited attention span (as you might have noticed, they also cannot pretend to be in a good mood and their state varies quite rapidly over time). So, a fun aspect of working with babies is that we need to find alternative and sometimes creative ways of measuring their abilities. This requires a good balance between scientific methodology and an appealing and baby-friendly presentation. Consequently, researchers developed and adapted a set of testing methods which are appropriate for babies. Vision testing is a nice example. A widely used method for testing infants’ visual discrimination is preferential looking. A typical preferential looking set-up includes the presentation of two visual stimuli at the same time, a positive stimulus (e.g. a patterned area) and a negative stimulus or foil (e.g. a homogeneous area). The logic behind it is that an infant who shows a reliable preference for a stimulus over the other must be able to discriminate between the two. Robert Fantz was the scientist who introduced this method back in 1962 and Davida Keller developed a version called forced-choice preferential looking for measuring visual acuity in 1979. In Teller’s clinical version of the procedure, an infant is presented with a series of grey cards containing a black and white grating on a side and a grey stimulus matched to the luminance of the grating on the other side of a central peephole (Teller et al., 1986). The tester does not know where the grating (positive stimulus) is located and simply watches the behaviour of the baby from the peephole to decide whether the baby can resolve this grating or not. Cards presentation proceeds from coarser to finer gratings and the finest grating the baby can resolve determines his or her visual acuity. Smart, isn’t it? Although it was introduced a long time ago, this is still the most widely used behavioural method to assess infants’ visual acuity and to quickly tell us which is the finest detail they can recognise.

Teller, D. Y. (1979). The forced-choice preferential looking procedure: A psychophysical technique for use with human infants. Infant Behavior and Development, 2, 135-153.

Photo 1 by Logesdo on pixabay.com