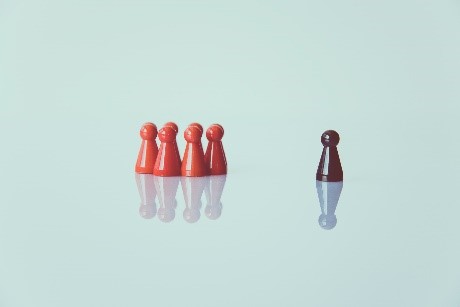 Being left out, whether it is through ostracism (being ignored and excluded; [1]), rejection (being explicitly communicated that we are not wanted; [1]), or social exclusion (being kept apart from others; [1]), is always an extremely aversive experience. It threatens primary needs such as belonging, self-esteem, control and meaningful existence, in adults [2; 3] as well as in children [4], and leads to pain or distress. Interestingly, research on adults has shown activation in the dorsal anterior cingulate cortex when experiencing ostracism, the same region of the brain that is activated when experiencing physical pain [5].

How do we study ostracism/ rejection/ social exclusion?

There are several widely used methods to study ostracism, rejection, and social exclusion in adults and children. The main method used to induce ostracism is the Cyberball [6], an online ball-tossing game in which participants believe they are playing with other 2 or 3 participants, which are in fact computer-generated. In this game, participants are either included (i.e. they receive the ball a third of the time), or ostracized (i.e. they only receive the ball at the beginning and are then ignored during the rest of the game). This method has been shown to have very strong effects on adults and children, to the extent that merely witnessing someone else being ostracized is enough to induce negative psychological and physiological responses in the observer [7]. Other paradigms are used to prompt social exclusion in adult participants, such as keeping them out of a chat conversation [8], or assigning them messages of exclusion (e.g. “you will likely end up alone in life”; [9]).

What are the cognitive and behavioral consequences of being left out?

Being ostracized, excluded or rejected greatly affects adults’ and children’s cognition and behavior.  In addition to threaten fundamental needs and decrease the mood, ostracism has been found to decrease cognitive abilities on effortful logic, reasoning, and memory tasks in both adults [9] and children [10]. On the other hand, ostracized adults and children showed increased performances in social tasks, such as heightened memory of social (as compared to non-social) events [11] and enhanced accuracy in identifying vocal tone and facial emotions [12]. These findings are thought to reflect an allocation of cognitive resources towards social abilities, at the expense of other non-social competences, as an attempt to re-affiliate after being excluded. Ostracism has also be shown to considerably modulate people’s behavior in order to facilitate their re-inclusion. For example, adults were more compliant when requested to donate money [13] and display higher levels of facial mimicry [14] after being excluded. After observing videos depicting ostracism, children also showed more action imitation [15], and even sat closer to a stranger than children who observed inclusion videos [16]!

In conclusion, being the (temporary) target of, or witnessing ostracism/exclusion/rejection unleashes a series of psychological, cognitive and behavioral changes. These changes promote pro-social behaviors, enhance social cognitive abilities, and are aimed at facilitating re-inclusion. However, when repeated or sustained over long periods, exclusion can have opposite repercussions and lead to aggressive and anti-social behaviors.