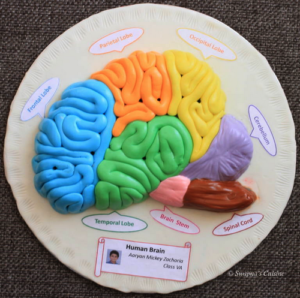 ‘Critical period’, ‘sensitive period’, ‘optimum period’… You may not be familiar with these terms, yet I’m sure you have heard of the idea: for example, an adult will struggle to master a second language while younger children can do so easily. Are there such critical time periods to learn something, say, to play the piano, basketball or synchronised swimming?

Brain plasticity
The idea behind this is the plasticity of the brain. To simplify the concept of plasticity,  imagine a brain made of playdough. At the beginning of life, connections in the brain are very malleable. They are easily influenced by the environment, just like fresh playdough can be easily shaped by our hands. With time, however, playdough becomes a bit harder to sculpt. Likewise, as we get older, the brain gets less sensitive to experiences. This sounds like that, if you are an adult, it might be too late, for example, to learn to distinguish different sounds that only exist in a foreign language.

However, the playdough metaphor only gets you so far. The changes in brain plasticity (and thus the existence of sensitive periods) differ across different systems (e.g. visual, auditory, phonological, semantic or motor). While it may be very challenging to acquire fine phonetic distinctions of a second language after mid-childhood, new vocabulary can be learnt just as well after childhood. Accordingly, experts have decided to ditch the expression ‘critical periods’ and now prefer to use ‘sensitive periods’ instead, because even the most stringent periods still can still be relatively malleable and reversible under certain conditions [2].

Start early or stay on the bench?
So what about the widespread idea that, to become an athlete or a virtuoso, you should start as young as possible? If you ask the most successful athletes or musicians, you would probably find that many of them started in their young age. There is indeed some evidence that those starting musical training between 6- and 8-year old develop better musical synchronisation later in life compared to late-starters, even when the total number of years of practice is the same [4].

In some sports training programs, the age range of 6 to 12 years is often quoted to as an optimal window for improving skills [3]. Do these mean that it is impossible to catch up if you start after this optimal window? The answer is probably no. There is currently not much scientific evidence for the existence of sensitive period in sports training. But we have to be careful how we interpret this. It could be that there are no such changes in the plasticity underlying learning motor skills between childhood and early adulthood. Or it could be that past studies have failed to capture age differences in sports learning plasticity. Indeed, the question can be tricky to study. For example, many studies find faster learning rates in children than adults. But this might be simply because adults have had mastered the target skills to some extent and thus have already little room for improvement at the time of testing. However, in a study where children and adults had to throw darts with the left hand, and had the same initial performance before training, researchers found no advantage to children’s learning compared to adults [3]. Bear in mind that this may not generalise to other skills, to a longer training period (2-days in this study) or different teaching methods.

The key to success may not always be age
Let’s not forget starting to learn a skill early does give you an advantage… The advantage of having more years of practice! Unsurprisingly, repetition is the key to successful motor learning [1]. Additionally, young children might benefit from other factors such as less performance anxiety or peer pressure. Adolescents and adults, on the other hand, could benefit from higher persistence or conscientiousness.

All in all, whilst there are some sensitive periods in early life for some key aspects of the development, in other domains, such as motor learning, the changes in brain plasticity as we age might be relatively small. Which means there is still large prospects of improving various skills as you practice them throughout life, and this even with an ageing brain [5]!

Thanks to Saya for her valuable copy-editing help.

Epilogue: While writing this blog, I came across a news too fun not to share. Before that, let me go back to the discovery of critical periods and the phenomenon of imprinting: Lorenz (1973 Nobel Prize) found that baby chicks that he raised himself would follow him whenever he wore his gardening boots, whereas wild chicks always follow their mother. This is because chicks are genetically programmed to form attachment with the first moving thing they see at birth (we say that they ‘imprint’ on it). In nature, the first moving thing that chicks see are their mother. However, Lorenz boots’ (or whoever breeds the chick) hijacks the program, which makes them treats the boots ‘as their mum’.

In an aquarium in Shirama (Japan), human carers prevent their emperor penguin chicks from imprinting on them (which happens to disrupt their breeding cycle), and they do so by… wearing penguin costumes, as you can see on this (genuine) picture! 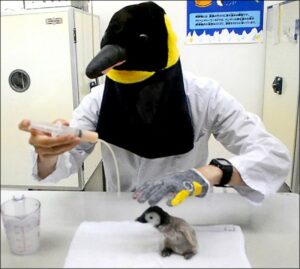