Language in terms of actions (“Let’s do science!”) instead of identities (“Let’s be scientists!”) also improved the persistence of especially girls in a science game [2]. Thus, subtle language components can help to reduce gender differences in science interest and participation among young children, and help reduce gender stereotypes. These gender stereotypes may cause girls to see themselves as not fit in the scientist category, resulting in fewer girls picking science as a career compared to boys [3]. 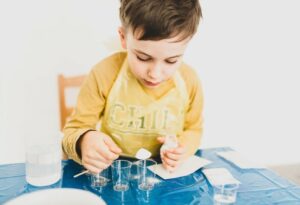 Do all Zarpies eat flowers?

Another aspect of language that can shape children’s perception of social categories and groups is generic language, the language that refers to abstract categories. For instance, based on the generic statement “Swans are white”, you would expect that “swans” is a category consisting of white animals, and that there are no black, green, or blue swans.

To investigate the effects of this generic language on children’s perception of social categories, researchers introduced children to a fictional group of people called “Zarpies”. Zarpies were very diverse in appearance. Children were shown a picture of a Zarpie accompanied by a statement that was either generic (“Zarpies eat flowers”), or specific (“This Zarpie eats flowers”). Children who heard the Zarpies described in generic statements were more likely to view the particular characteristic of one Zarpie as a fundamental characteristic of the Zarpies group (also called social essentialism) [4]. These beliefs that social categories mark fundamentally distinct kind of people facilitate social stereotypes [4], for example that girls are bad at science. We generally don’t think about how these specific aspects of our language influence our children’s behaviour and perception. However, recent research has shown that our way of phrasing things does influence young children. Perhaps by being more cautious with our language we can decrease the forming of rigid social categories about gender, race, identity and ethnicity in young children. After all, girls can be scientists and not all Zarpies eat flowers, and children should know this.