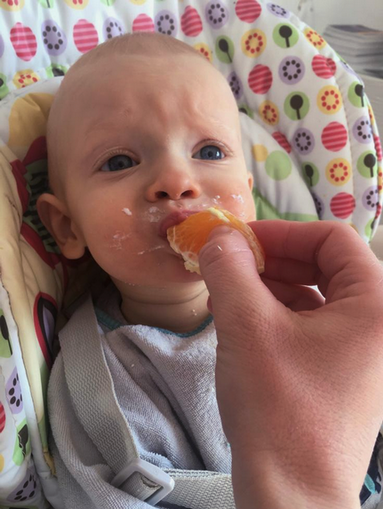 Do you also find yourself surprised when meeting someone who hates tomatoes or chocolate, and then shrug it off with a ‘well, that’s rare but there’s no accounting for taste’? Some weeks ago I decided to put on an apron and… use my favourite search engine to figure out ‘What makes us like… what we like’, and how it sheds light on why some parenting advice works better than other.

On the following pictures, this newborn baby is the not-so-lucky subject of an experiment to check our innate preferencesi: while they seem to reject the bitter taste, they may have a sweet tooth given their sucking reaction (as if saying ‘I want more’).

Why might that be? In nature, sweet flavour is reliably present in harmless and energy-dense aliments such as fruits, while bitter food is more likely to be poisonous food (and sour, spoiled food). That’s why it makes sense, from an evolutionary perspectiveii, to find those strong preferences (towards sweetness over bitterness) at birth and early on: they have been selected through evolution so that children will spontaneously choose nutritious food and keep safe from risky foodiii.

Although we are all born with similar attitudes towards sweet or bitter tastes, some preferences are running in families [1]. For example, a specific gene dictates the shape of a protein in your taste cells, which in turn tells if you will be rather indifferent to bitterness, or very sensitive- even later in life (in which case Brussel sprouts will never be your friends).

Preferences for smells also modulates what food you find nice, and this again can be inherited. For example, how much you like the smell of cinnamon is quite well transmitted across generations [1] (which may be why adding or omitting cinnamon in Mum’s apple pies will never be a matter in your family debate!)

3a. Infuse a bit of mum’s diet

Genes alone are never enough to define behaviour- our everyday experience shape it, a bit like you can make crepes or knöpflesiv based on the same ingredients. Our environment is starting to influence of food preferences as early as in the womb!

The systems supporting the senses of taste and smell (essentially: taste buds and the olfactory bulb) are already close to finalized before birth. Which means that during pregnancy foetuses can taste and smell the amniotic fluid that is around them. This amniotic fluid takes on flavours from the mother’s diet, and this can determine how much a flavour is enjoyed after birth. A study asked a group of women to drink carrot juice during their 3rd trimester of pregnancy (and asked another group not to drink any carrot juice), to see how their babies would react to the taste of carrots later. When they tried the carrot flavour for the first time, the babies whose mum had drunk carrot juice enjoyed it more than babies whose mum didn’t drink carrot juice [2]. Similar phenomena happen for anise [3], or garlic (Hepper1988 cited in [1]).

3b. Incorporate some wary-learning mechanisms

Beyond the innate tendency to turn away from bitter and sour; it is adaptive (again, in evolutionary terms) to learn what other flavours should be avoided. A mechanism called conditioned taste aversion prevents you from ever eating again a food that gave you food poisoning! A friend once got terribly sick when she was young after eating pot-au-feu and drinking violet juice, both she still can’t stand the smell of today. But how can your system know which element is the culprit, among all the food ingested before the bad episode? Well, that is hard to tell- it seems to follow a ‘better-safe-than-sorry’ policy (i.e. probably not every pot-au-feu or violet juice are harmful- but in doubt, avoid them all!)

3c. Learn from the positive experiences

Tastes don’t solely develop by keeping track of and rejecting the bad; they’re also the fruits of the various process that makes you enjoy and seek certain food.

If you used to pull a face after drinking coffee but have become an aficionado of the beverage, what follows shouldn’t surprise you. One way through which a preference for a flavour can (unconsciously) develop, is via associative learning of the effect (post-ingestion) of a substance with its flavour (prior to ingestion).  Regarding coffee, because the bitter taste is consistently followed by a pleasant consequence (psychostimulant effectiv), you progressively accept it and eventually enjoy drinking it.

Forming a taste preference for salt might be learned in an analogue but less intuitive fashion. Some researchers (Leshem, Abutbul and Eilon cited in [5]) found that physical exercise tends to enhance the preference for salt, and believe that’s because the salty taste is paired to the refill of saline levels in your body (a welcomed effect after you’ve lost sodium by perspiration).

For the majority of learnt preferences, the mechanism involved may be flavour-nutrient learning [5]: after ingesting food rich in energy, the feeling of satiation is associated with the flavours sensed earlier. As for coffee or salt, the positive effect (here, being sated) may be what makes you appreciate later on a previously neutral flavour (the absence of nutritious value of sand and rocks might explain why you prefer eating granola than those at breakfast). However, this flavour-nutrient learning hypothesis is particularly hard to confirm in humans.

As we’ll see now, understanding the learning mechanisms can direct us towards optimal practice.

3d. Now savour… the strategies to present food to your child

The first two years of life matters a lot in developing eating habits, as infants accept relatively easily new flavours and the food preferences formed early can last into adulthood. Later, about when toddlers start to roam everywhere, comes the infamous neophobia (unwillingness to eat any unfamiliar foods). It might help to keep in mind that neophobia is not a mere tantrum but has been selected by evolution to keep children safe from trying any unfamiliar- thus potentially poisonous- food (in the times our species evolved, not every food in the reach of children was safev). The rejection of new food usually declines sharply after the age of six [6].

Coming to my mind are the crafty strategies my mum was implementing to have us eat vegetables, from concealing carrots in lasagna, to drowning broccolis under bechamel. Those could have worked through so-called flavour–flavour learning: pairing a well-appreciated flavour with a less-appreciated one, to increase liking of the latest. However, studies (cited in [7]) have shown this isn’t efficient- nor is the bargaining “clean your plate or you won’t have desert”. Both strategies might work well in having the usurper food ingested, but they don’t create any liking for the food in question.

Many studies on the matter conclude that the best strategy to have young children accept and form lasting preferences for new vegetables (before age of two [7], and in preschool [8]) is repeated exposure. The technique simply consists in presenting the unfamiliar or unwanted food, inviting to consume as much or as little as the infant or children likes (without any sort of reward [9]); and repeat this spaced by several days or weeks. Trying several times the same flavour makes it more and more familiar, and can eventually form a preference. The magic may require as much as 8-10 exposures, but this may be worth trying since scientific evidence converges on this being the best shot!

Practitioners have a handful of tips to put this approach in practice: make the whole context enjoyable by involving the kids in the meal preparation, have them smell the food, make a pretty plate, leverage their natural trend to imitate (thus eat like you), etc.

This was just a piece of answer to how we develop food tastes. Among the preferences shaped by early life experiences, some will stay, others will go (the splash of milk in my tea can testify for that- 9 month in England had me accept what was for me a heresy).

i Newborn studies are looking at whether some psychological trait is present at birth, as a mean to prove that the trait is innate. One problem is that some traits can be innate and not visible at birth (for example, the ability to speak is innate in humans, and yet needs experience to appear).

ii Heritage of Darwin’s work on evolution by natural selection, the evolutionary perspective looks at why a given trait has been selected (i.e., explains why that trait is still present in a species today; here the traits are liking sweet and disliking bitter taste). In other words, it asks what evolutionary advantage the trait gave to an individual.

iii Following the preceding point: a trait may have been selected because that trait was adaptive (that is, bringing an advantage for survival) over a significant period of evolution, but it might not be adaptive anymore today. For example, having a strong appetite for sugar was an advantageous trait because it motivated our ancestors to search and get food rich in energy (sweet food was scarce, thus a sufficient drive for sweetness was beneficial for survival). However, in our modern society sugar have suddenly become pervasive, too easy to find and thus liking sugar isn’t advantageous anymore- this is called an ‘evolutionary mismatch’.

v This blog mentioned only the genetic and behavioural levels. To say a word about the neural substrates of taste preference, liking (at least for sweetness [6]) corresponds to the activation of the reward centres in the brain- very much like when consuming alcohol and drugs. The learning mechanisms mentioned in the blog (association) are believed to strengthen neural connections between sweet receptors and reward circuits; this on top of the innate connections between sweet receptors and reward centres (that cause our innate drive for sugar).

vi This is another example ‘evolutionary mismatch’: in our modern society, there are very little chance that children find harmful food in their reach (or that we present them harmful food), so in that safe environment pickiness is rather disadvantageous (at least for parents!)