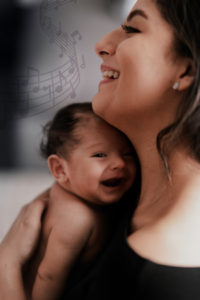 There is also evidence that newborns can discriminate and remember sounds and melodies. For example, Granier and colleagues analysed heart rate changes in one-month-old babies and results suggested that they can distinguish a melody they’ve heard in utero from an unfamiliar melody [3].

What could be the benefits of this early-appearing sensitivity and processing skills for music?

From the evolutionary perspective [4], the function of lullabies is to signal parental attention. Some forms of care, for example, a parent watching for danger, are hardly noticeable to the baby (contrary to, say, feeding). The idea is that for a baby, recognizing a lullaby leads to a feeling that a parent is attentive to them, which is ‘reassuring’, thus let baby sleep, safe and sound. Corbeil and colleagues [5] found some evidence for lullabies’ particular soothing power: 7- to 10-month-olds stayed calm two times longer while listening to singing than while listening to other types of talking.

What musical features of lullabies are linked to this special soothing function?

The typical high-pitched voice you use when speaking or singing to babies (a characteristic of infant-directed speech [6]) is present in lullabies across cultures [1]. Note that high frequencies are more easily detected in a noisy environment than lower frequencies, which might partly explain why this feature of baby talk was selected by evolution.

Beyond the pitch of the singer, lullaby is a musical genre of its own. Compared to dance or love songs, lullabies are melodically simpler and gentler [7].

Finally, lullabies are more than just a song. Soothing an infant with a lullaby involves holding and rocking baby in your arms, adjusting the speed and intensity of rocking as well as the rhythms and volumes of singing. Ultimately, it’s a multimodal experience fine-tuned to the baby’s “here and now” state.

Anecdotally, lullabies1 can still have me dive down deep into sleep. This might imply long-lasting preferences for their acoustic features, if not a sweet reminiscence of being cradled.

1If you’ve found the three references to a specific lullaby, you’re a real Frozen fan.

Photo by Kelly Sikkema on Unsplash.com