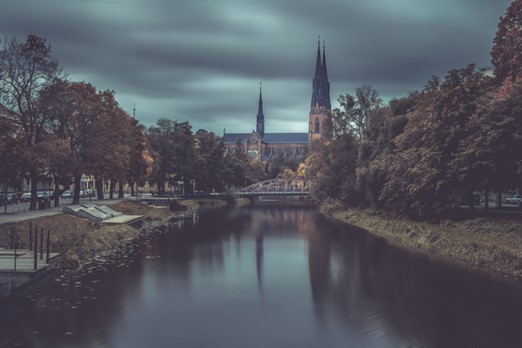 After Saya’s thrilling first post (I strongly advise you to catch up here if you haven’t read it), get on board with me, Aude, born and raised in France.  Apart from cheese and croissants, I was fed with an academic blend of Biology, Math, Engineering and Cognitive science, before starting this wonderful adventure in the MOTION project.

Freshly moved to London to start my PhD at Birkbeck – University of London – I traded its bustling streets for the placid landscape of Sweden during the ten days of the first training school of the MOTION project, in the end of September. There I met my other twelve fellow “Early Stage Researchers” (ESRs) who had come from different places all over Europe. This mix of cultures and experiences is essential for fruitful science and you’ll hopefully be able to see this when we present our collaborative work (right on this blog)!

Kindly hosted by the team of the Uppsala Child and Baby Lab at Uppsala University, this introductory MOTION training event was a perfect opportunity for me to get to know the other academic and industrial partners of the project.

I will take you inside the training days, which included talks and demonstrations by industrial partners involved in the project, so that you can get a glimpse of cutting-edge technologies we will be using in our research. We had the chance to try all equipment by ourselves before your children may put them on in the near future.

Do you ever feel like your head is heating up when trying to solve a hard problem? That’s because a lot of blood needs to make its way to feed your neurons with oxygen. This phenomenon can be captured by Artinis Medical Systems’ cap, by using ‘Functional Near Infra-Red Spectroscopy (fNIRS)’ technology. In a nutshell, what the cap does is sending beams of light towards the skin, and measuring how much light comes back after having bumped onto the red blood cells – which all relates to the concentration of oxygen and thus the brain activity in this area.

On the left picture is me with a fNIRS headband tracking the changes in my brain while I am struggling to do mental calculations. On the right side, Lisanne seems happy to wear this lightweight and comfy device.

As we are interested in children’s spontaneous movement, you would probably not be surprised to hear we will be using motion capture technology. Capturing the subtle fluctuations in movement has the potential to indicate much more than the eyes can see, and that’s what Qualisys system offers. By using shiny little balls (reflectors) placed on the hand of a baby, and special cameras all around, we can learn a lot about psychological processes that may drive behavior, and get insights into the way young children develop abilities to plan and act upon the world. 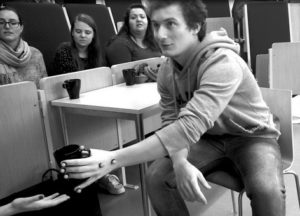 On the picture you can see Tommaso executing a very complex task… grasping a cup of coffee!

The saying goes that “Eyes are the window to the soul”. Well, we believe it’s true and that’s why we want to employ eye-tracking to discover – through their gaze – what may happen in the baby’s mind when they can’t verbally tell us yet! What around them may catch the most their attention? What visual information would they use to understand other people’s action? A technological challenge addressed by Smart Eye Systems is to make eye-trackers adapted to the unique traits of chubby babies’ faces.

No worries, Saya is not trying to kill you with her look: she’s simply trying out Smart Eye’s device!

You may already have heard about electroencephalography (EEG), the recording of the brain electrical activity, which happens because neurons are constantly communicating between each other. Those tiny currents can be picked up thanks to the sophisticated technology of Twente Medical Systems International, to possibly uncover the secrets of babies’ brain. On top of that, they allow us to simultaneously measure many other electrophysiological signals such as the activity of muscles (we call this electromyography or EMG), heart, and even sweating (using this, we might be able to tell whether your little one is lying!)

Following the introductions of the research equipment, our training featured key academic skills for young researchers like us to have, such as how to find good research questions that are scientifically relevant and with promising impact for society. We also had the chance to get advice from people at different stages of academic career- PhD student, post-doc and senior researchers. We had a general discussion on the life and goals of a PhD student and a possible career path after a PhD, but also learned specific skills such as writing a scientific paper. As someone who has just started a new life adventure, we had plenty of questions and were able to cover quite a lot of them.

Moreover, because we don’t think ideas pop up only in a classroom or research laboratory, the exchanges between us continued over dinner and across the lovely city of Uppsala (which you can admire on this picture taken by Tommaso). 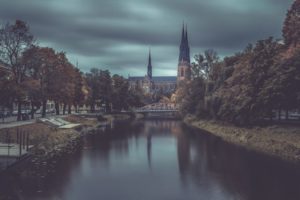 After this gathering between enthusiastic researchers, filled up with this first set of academic and technological training, we are prepared to start addressing the tide of exciting questions we have about young children’s development happening while they are naturally interacting with their social environment. And we can’t wait to sharing our findings with you!