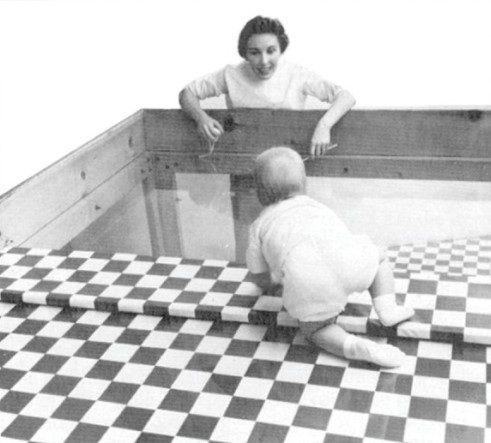 In this way, Gibson and Walk (1960) could test babies’ depth perception by examining whether they would crawl through the cliff to their caregiver or not. Although most of the babies crawled over the cliff, they all relied on their vision and sense of touch to navigate through the apparatus, showing that they were indeed perceiving depth. 25 years later, Sorce et al (1985) used this same apparatus to investigate infants’ behavioral response to maternal emotional signaling, in a study that I consider as one of the most interesting psychology study ever! They placed the babies on the shallow side of the apparatus, while the mothers were standing at the deep end of the visual cliff. They asked the mums to express joy, interest, fear, anger or sadness while the infant was considering crossing the apparatus. All infants soughed information on their mothers’ faces, but their behavior varied depending on the emotion expressed on it. When the mothers expressed joy or interest, most infants crossed the visual cliff. However, when the mothers expressed fear or anger, very few of them crossed. Finally, when the mothers expressed sadness, an intermediate number of infants crossed. Interestingly, in the absence of depth, only a few infants sought information on their mothers’ faces, and all of them crossed the cliff even when their mothers were expressing fear.

This study thus demonstrated that infants are capable of social referencing, that is, seeking emotional information, especially in contexts of uncertainty. In addition, it showed that they can adapt their behavior in function of the information they read on other people’s faces. In short, when they are facing a new situation and don’t know how to behave, infants rely on us to decide how to react. Thus, next time that your little nephew looks at you before going down the new slide, or before trying Brussels sprouts for the first time, give him your biggest smile to encourage him!