In this post, I would like to talk about my working-from-home experience so far and go through what a researcher can do without any access to testing facilities. Also, I wish to share some thoughts about remote research with you.

When we decided to become a part of the MOTION Project, it was clear to all of us we would move from our own country. We knew we were leaving there our families, our friends, our favourite food, our MOTHER TONGUE.

From my point of view, the first elements were the ones I was worried about: how much I would miss my mom, my grandma’s pasta, having “aperitivo” with my friends. The idea of living in a country of which I couldn’t understand the official language was almost completely ignored by the naive Valentina I was in the Autumn of 2018.

I thought it was something completely normal, something not that relevant, that could have been overcome without difficulties. Many people I know emigrate to countries where the language spoken doesn’t even share a word with their own mother tongue. How could that possibly have been tough for me, moving to the Netherlands, a country where the language has so many common elements with my beloved Italian? Well, it turned out I was mostly wrong about it.

Duplo or Lego blocks may have been one of your favourite toys when you were younger. A couple of blocks could create a castle, rocket or boat, with just your imagination as limit to your creations. But these fun blocks can also be very useful for research purposes. For example, Duplo construction blocks can provide us with the ideal way to investigate action planning while keeping our cute little participants entertained.

Read moreThe science of Duplo: How blocks can help us understand action planning in young children.

This post relates my experience of collaboration with Joanna – the MOTION PhD student from Radboud University – and what I think is essential to make a collaboration successful.

The choice of the collaborator
One of the key to a successful collaboration is the choice of a good work partner. You might have the best research project in the world, if your partner is not competent or if you’re not work-compatible, your project might fail. In the case of the MOTION project, the task wasn’t too hard, as I immediately got along – on a working and personal point of view – with most of the other PhD students. In the end, Joanna and I decided to start a collaboration, as we had the most common interests. And it turned out to be a great choice, as we’re currently carrying out our study together in my university in Milan.

So, how to find the ideal collaborator? First, you have to find someone who has the same scientific interests as you, and who wants to work on the same topic. Then, of course, you also need someone who has good research skills, ideally complementary to yours. But outside of the practical aspects, the personal side is also essential for a successful collaboration.  Working with someone you get along with, with whom you can communicate and work efficiently, but also sit back and laugh when needed, is very important. Because you will spent a lot of time together, and because there will always be difficulties to overcome. Doing all of this in a good atmosphere is so much easier! 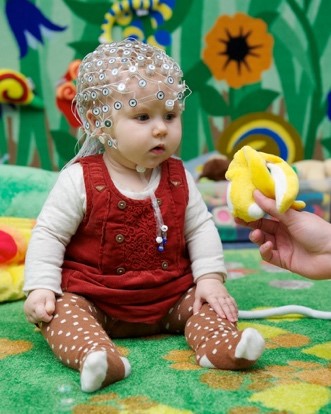 In my last blog post, I wrote about the difficulties of collecting good brain data from babies. It is a challenge, so you may have been thinking, why bother at all?

Some people say babies are boring – they look like doing nothing other than staring (and crying, sleeping and being fed). For me, that couldn’t be farther from the truth. Babies are always looking, listening and learning. In short, there is always something going on in their brain. We collect brain data to find out exactly what is happening.

The physiological reaction to neural activity is modulated by neurometabolic and neurovascular coupling. Increased neural activity triggers an increase in oxygen delivery to the active region a few seconds later.

This reaction can be modulated by measuring the oxygenated haemoglobin and deoxyhaemoglobin expected relative concentration changes in relation to an event in relation to the known canonical model for the haemodynamic response.

Models of this reaction have been created, alike the one in figure (2), from empirical data for adults. Infant studies however, sometimes refer to what came to be known as a IRF or Inverse Response Function, for certain tasks – figure (3).

If we decompose each of these systems, in order to take a closer look at known metrics.

Grey matter develops most of its volume until the third year of age and in terms of blood supply, it is labelled that for one year old infants the average CMRO2 (Cerebral metabolic rate of oxygen) was 38.3±17.7 μmol/100g/min and was positively correlated with age (p=0.007, slope 5.2 μmol/100g/min per week), although the highest CMRO2 value in this age range was still less than half of the adult level.  (Liu et al. & Solokov et al)

The Cerebral blood volume CBV and Oxygen Saturation Percentage are alto quite variable, not only for infants but also for different cortical structures in same age group infants. (Franceschini et al).

This leads to different proportions and in-homogeneity, depending on age and brain region.

However, inter subject differences do not end there, task difficulty depending on brain region is also relevant parameter to consider.

In conclusion, data baseline adapted and specific to paradigm is even more relevant for Infancy studies, given the inter-subject, inter-cortical structure and task subjective variability of responses. We recommend before the beginning of any functional infancy study, taking a look at the review from Issard et al 2018, which covered over 20 years of infancy reported inverse responses, both in fNIRS and BOLD MRI, assessing that:

Finally, the frontal cortex shows more variable responses, depending on stimulus complexity and age of participants. Social stimuli, such as speech and faces, elicit canonical responses earlier than non-social stimuli (such as fruits or flashing lights).” 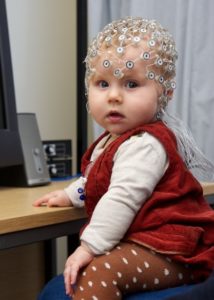 Read more3 things to know about this brain cap (or EEG, or electroencephalogram)