Duplo or Lego blocks may have been one of your favourite toys when you were younger. A couple of blocks could create a castle, rocket or boat, with just your imagination as limit to your creations. But these fun blocks can also be very useful for research purposes. For example, Duplo construction blocks can provide us with the ideal way to investigate action planning while keeping our cute little participants entertained. 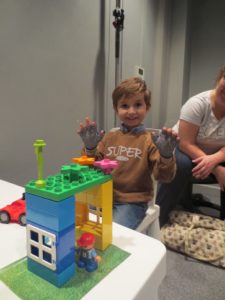 Previous studies have found that 5-year-olds are able to execute an action sequence to achieve a key goal [1,2,3]. 5-year-olds are able to execute the sandwich sequence in the right order, because they can maintain the key goal of making themselves a sandwich. However, younger children seem to have difficulties with maintaining the primary goal in a complex action sequence [1,2,3]. For example, they might lose track of the overarching goal of making a tasty sandwich and eat the cheese straight away. In this current study, we are interested to find out what are the cognitive changes in this preschool period that help to control such action sequences.

To explore this, we asked 3-, 4-, and 5-year-olds to build a Duplo house. The building involved several subgoals such as constructing each of the walls, alongside the key goal of building the house. During the building, we measured very precisely what the actions of the child were with the use of motion capture sensors attached to our ‘magic gloves’. Capturing the movement characteristics gives us information about how children decide which action comes next in a sequence. Lastly, we played some fun games to measure executive functions (such as inhibition, switching and working memory) and motor competence, which might be related to the ability to execute action sequences. 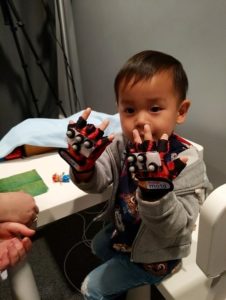 Analysis on these variables allowed us to observe three main findings. Firstly, we were able to show that 5-year-olds were more often successful at finishing building the house than 3-year-olds, indicating that they were better at keeping track of the main goal. The score on the inhibition task, the ability to stop a process from happening, was found to be correlated to the ability to finish the key goal. In other words, children who were better at inhibition were more likely to build a complete house.

Secondly, we measured the ability to follow subgoals by looking at the switches between constructing with different colours of Duplo blocks, which each represented different subgoals. Older children had less colour switches than younger children, meaning that they were better at following subgoals. The ability to follow the subgoals correlated with both the score on the inhibition task, and the score on the working memory task. The latter measures the ability to temporarily hold information in mind. 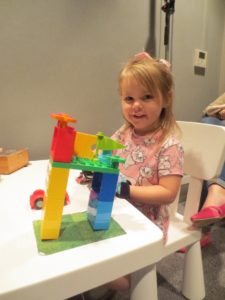 With our very precise movement data, we were able to investigate the reaching movement in which children switched from one subgoal to another. In adults, the reaching movements at these decision points are often slowed down [4,5]. Children who had a less switches, thus who were better at following the subgoals, showed a longer pause time before moving at these decision points. This could possibly indicate that they are taking some time to plan their next action.

In conclusion, toy blocks can be a useful piece of equipment to use in research, enabling us to gain more knowledge about action planning and action selection. The biggest plus, of course, is that almost all children love to do experiments that involve playing with these entertaining colourful blocks, providing an excellent example of how fun participating in scientific experiments can be! 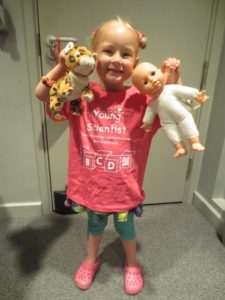 We would like to thank all the families who participated in our research! Their contribution and enthusiasm are invaluable to our studies.